Elie Wardini is professor of Arabic at Stockholm University, Sweden. His research has focused on Semitic languages, especially Aramaic-Arabic contact from a diachronic and sociolinguistic perspective. 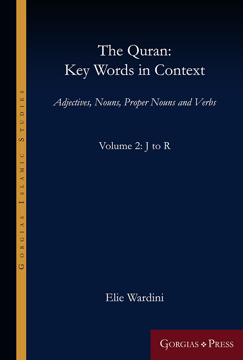 The aim with the present series, The Quran: Key Word Collocations is to present the Quran as raw data with as little interpretation as possible. The digital text used for this purpose is the Uthmani text of the Tanzil Quran Text. This text is widely used, and we have conducted some comparison to pre-digital age printed editions of the Quran. All vocalized Arabic text is quoted unaltered in any shape or form from the Tanzil text. Unvocalized Arabic text and transcriptions are my own. In the present series, Collocation is defined as a Key Word, here adjectives, nouns, proper nouns and verbs, forming the center of a cluster with four co-occurring Key Words (1° and 2° of proximity), the first two to the left and to the right, where available. Every Collocation of each Key Word in the Quran is presented in context, as a rule with six words to the right and six to the left of it, where available or where the formatting permits (keeping each quote on a single line). The central Key Words have been grouped by root > lemma. The co-occurring Key Words are listed by lemma. These are then sorted alphabetically according to Arabic and UNICODE order. Citations are sorted by the degree of proximity of the co-occurring Key Word, the closest to the left first, then the right and then the second closest to the left and then right. In grouping the words, no attention has been given to the semantics of each word. Only on rare occasion have similar forms of words or proper nouns been separated in order to avoid confusion In assigning each word a root and lemma, Classical dictionaries and Quran commentaries, as well as modern Quran dictionaries have been consulted. Deciding on these is not always obvious, since classical dictionaries and commentaries sometimes either disagree or present divergent variant readings or root and lemma attributions.